Gulshan works as an independent consultant and as an inspector having begun her working life as a teacher. She is involved in leading  inspections as well as providing consultancy, training and facilitation in a wide range of areas and to diverse audiences. Her consultancy work includes working closely with academies and academy chains, including MATs, and she is a leadership consultant with the Bexley Education Improvement Partnership. She is also currently leading an Able Pupils' Project for Lewisham and is a SIP to three secondary schools in this LA. Gulshan's subject specialisms include science, mathematics, computing and technology. A key part of Gulshan's work has included looking at cross-cutting issues such as SEND; EAL needs; pastoral support etc and the impact of these strategically on the school. Her work in coaching middle leaders, as well as those in senior positions, has been a key factor in helping schools improve their provision and outcomes.

Over her career Gulshan has worked with schools (across the 3-19 age range and including independent schools, academies, PRUs and special schools), universities, a broad range of local education authorities across the country as well as local councils and voluntary sector organisations to provide advice, guidance and training to improve provision and, hence, outcomes. Much of her work has involved reviewing organisational effectiveness and providing support for improvement and development. This work includes developing consultation, engagement and involvement of parents and other key stakeholders in relation to education. A key part of her role has been to work with senior and middle leaders and governors to help them develop their skills especially in relation to performance management and self-evaluation. Gulshan regularly puts teams together to help review schools and provide insightful and structured feedback on how they can improve. She reviews the work of governing bodies and is involved in coaching and mentoring leaders at all levels and in many different organisations, including outside the world of education. 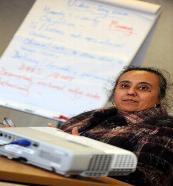 An important part of Gulshan's work with organisations has been around equality of opportunity and providing advice and training on how to promote diversity effectively using key, but often very underused, tools provided within the legislative framework. Over the years, Gulshan has developed an in-depth understanding of culture, organisational and geographic, and how this impacts on the way 'things are done here'.

Gulshan was until recently a board member for the Ipswich and East Suffolk Clinical Commissioning Group, which took over the running of the NHS health service in East Suffolk from April 2013. Her specific role was to ensure involvement and engagement of patients and the public in commissioning decisions.  Gulshan was a member of Suffolk Police Authority between 1999 and 2012, and she chaired the authority between 2005 and 2010. Both Gulshan's board roles draw on her considerable strategic planning skills as well as her ability to ask the right questions before making a decision. Both roles also support Gulshan's work with school governors including leading independent reviews of governing bodies, and developing and delivering training programmes for governing bodies. Gulshan played a key role in securing a contract with E-ACT for INCYTE to train governors in all E-ACT academies and was responsible for writing the training materials as well as training the trainers.

We are located at:

If you have any queries or wish to make an appointment, please contact us:

Get social with us.